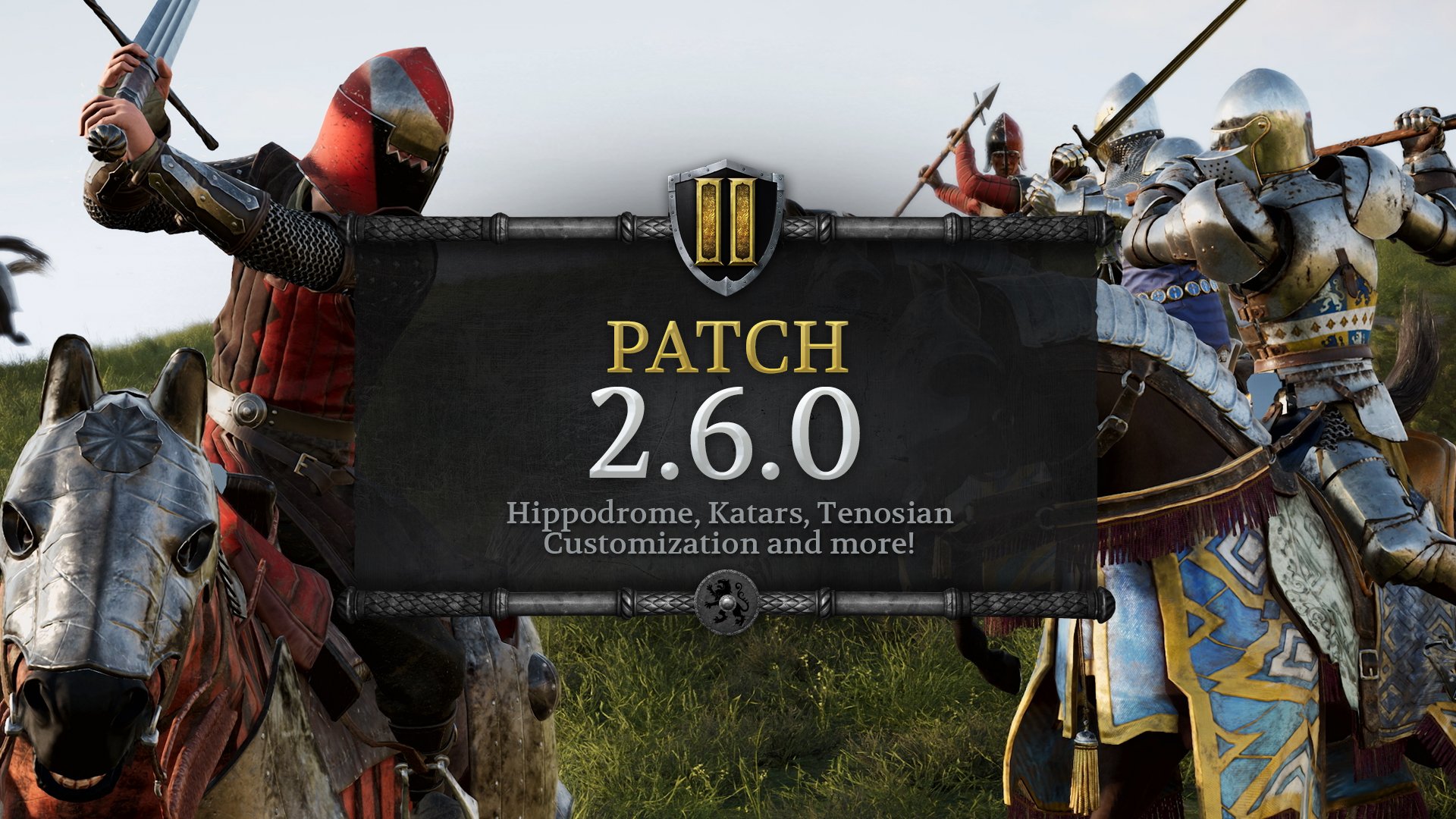 Update 2.6 is here! The Reinforced Update features a new TDM/FFA map known as Hippodrome, new dual-wielded Katar weapon, new player customization for Tenosia, horses added to some existing maps, and more! Read on below for all the details. 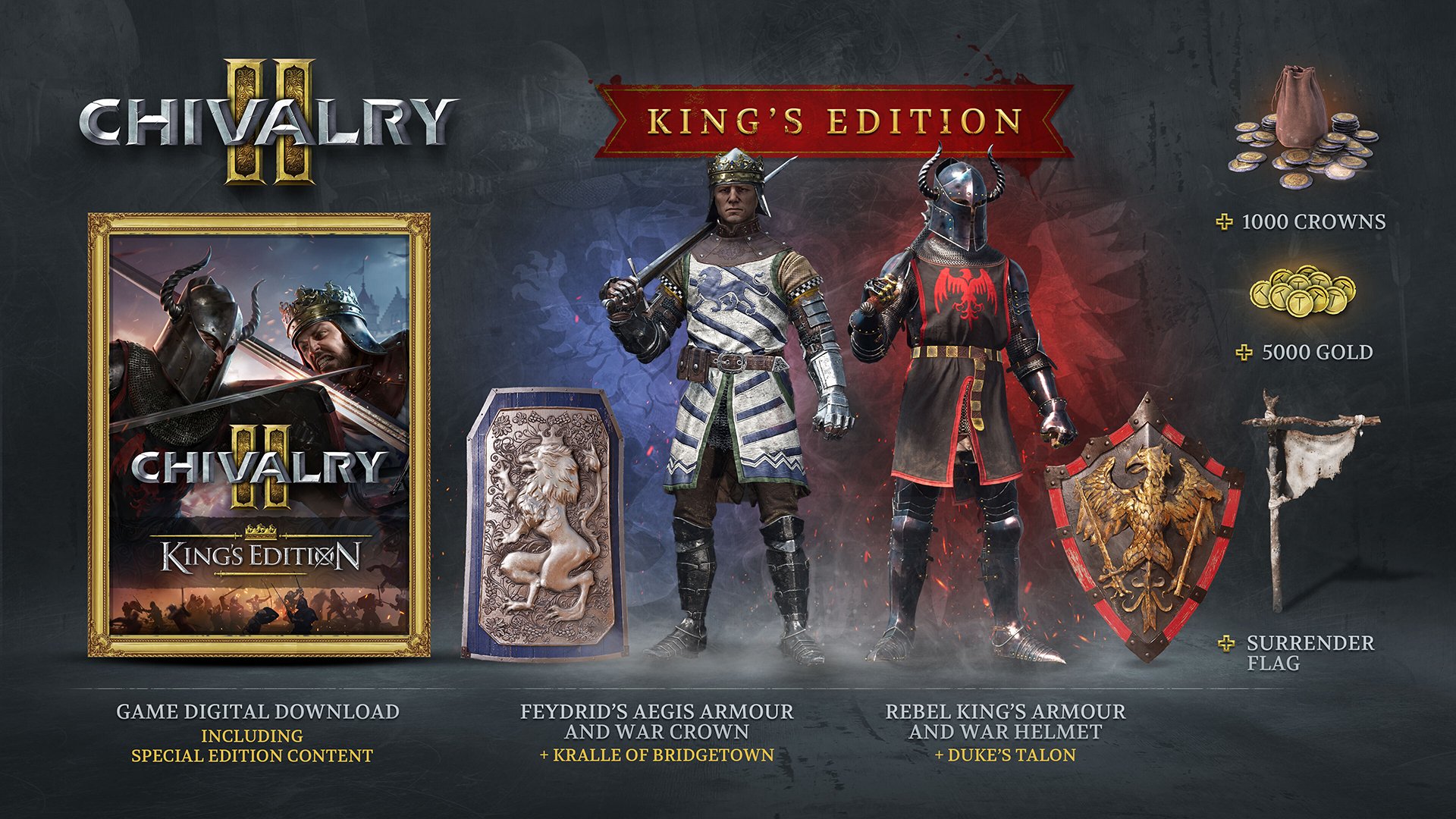 In celebration of the 10th anniversary of Chivalry: Medieval Warfare, we’re excited to introduce a regal new edition of Chivalry 2! Buy Chivalry 2 King’s Edition now to get the following content:

Chivalry 2 King’s Edition is available for $59.99 USD (or local equivalent) and also as an upgrade from the base or Special Edition, on EGS, Steam, and In-game. Coming soon to consoles.

With team switching being a hot topic among the community, we have increased the restrictions that allow flexible team switching to uneven numbers. Originally, there was a grace period between the match warmup that would allow greater flexibility on choosing your team. Unfortunately, this also enabled teams to become one sided depending on: who was switching, and how many were switching.

We have since applied the above restrictions directly upon loading into the match. In the interest of considering player-organized events, we have applied this restriction to matchmaking servers; standalone servers are unaffected by this change. We will continue to monitor the results of this change once it goes live.

By popular demand, we have now added the Tenosian maps (no horse variants) to 64 player mixed modes!

FFA Hippodrome has been added to its own server set to allow players to informally joust with Horses. This will be the only map in rotation for this type of duel server.

Community feedback prompted a review of the current placement of the highland sword within the game. We confirmed the weapon as one of the highest performing weapons due to some of its unique attributes of damage vs length. We’ve made some changes in combination with some bug fixes to make this weapon more pleasant to fight against while still maintaining some benefits of the overall weapon.

Discussion with community members outlined some frustrations around the “fun” of the spear. In certain situations, the spear was noted to feel fairly oppressive, therefore the above solutions were explored for this update.

A counter attempt is a move that is intended to be a commitment. High level duels have been seen to use dodges to avoid punishment.

Jabs have been noted to be particularly oppressive in some situations, we have added this functionality to allow the player to better react to different combat scenarios.

Ambushers now carry with them the new Executioner Perk, which allows the player’s final hit to be the killing blow instead of downing the player. In addition, the Quiver was deemed to not synergize with the Ambushers class role, so the Bandage kit was added instead to provide additional utility to the class and encourage greater team play from Ambusher players.

Horses are now part of the map for the following objective stages in the 40 player queue:

We’ve increased the autonomy of individual duel servers by increasing the penalty for breaking duel server rules resulting in a votekick (note that the determination of this is initiated by the players inside the server itself.) We will continue to monitor the change.

Wear a pumpkin on your head or throw a pumpkin at your enemies! New map TDM Desert, as well as TO Darkforest, TO Rudhelm Siege (with horses), and TDM Wardenglade (with horses) are all decorated for the spooky season.

A potential fix was implemented for the no-helmet bug in our testing branch where the issue remained dormant for an extended period of time. Closer to the release of 2.6 it presented itself again, resulting in it being sent back. Unfortunately, this bug will remain in 2.6 while we continue work on it.

Knights, Today we’re excited to bring you an update on the development of Chivalry 2. The release date for our […]