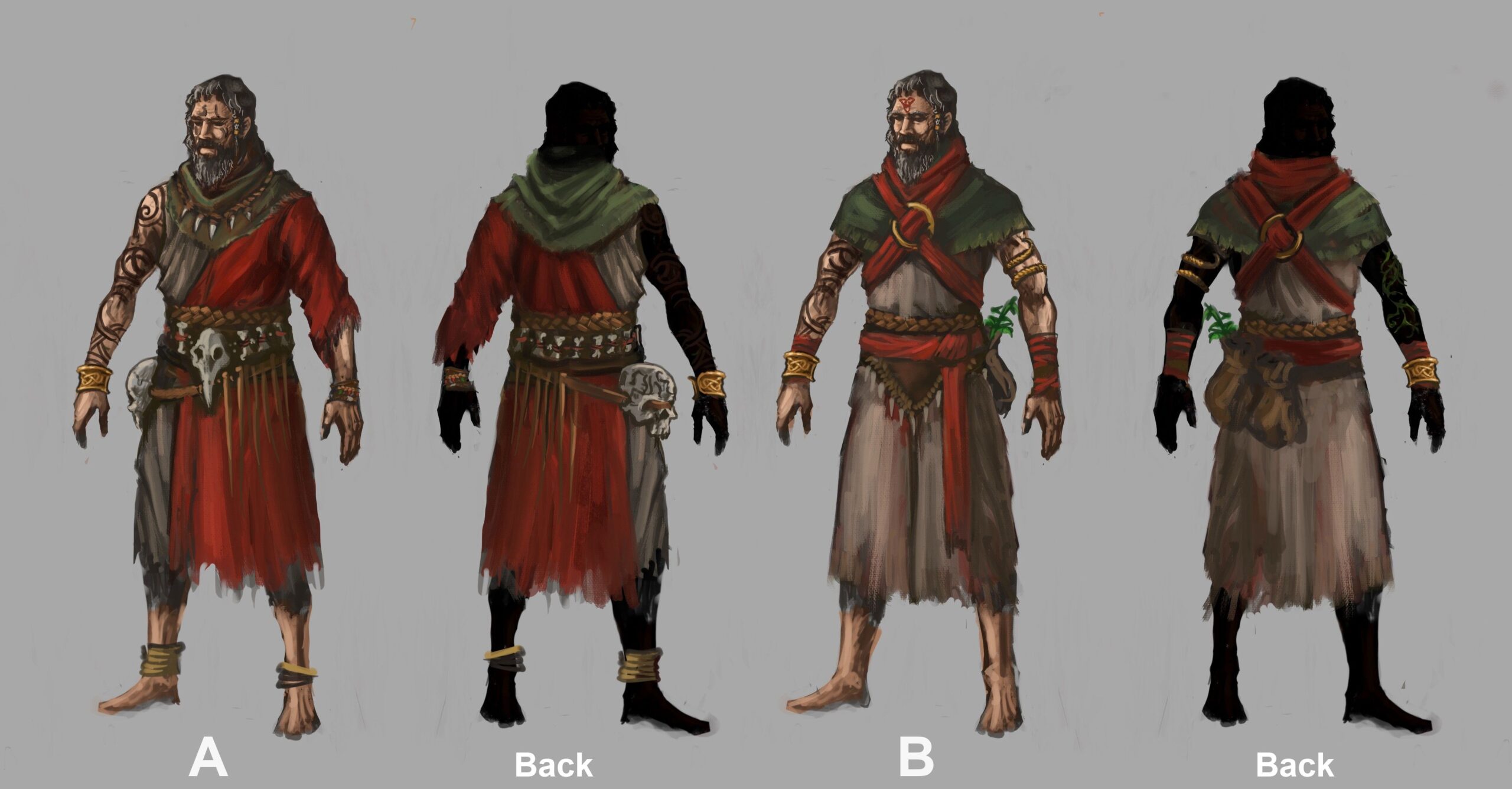 We’re hosting biweekly streams on our Twitch channel where we talk to Torn Banner developers, community members, and we’ll soon be debuting upcoming features over on our streams as well so you’ll want to stay tuned for those! 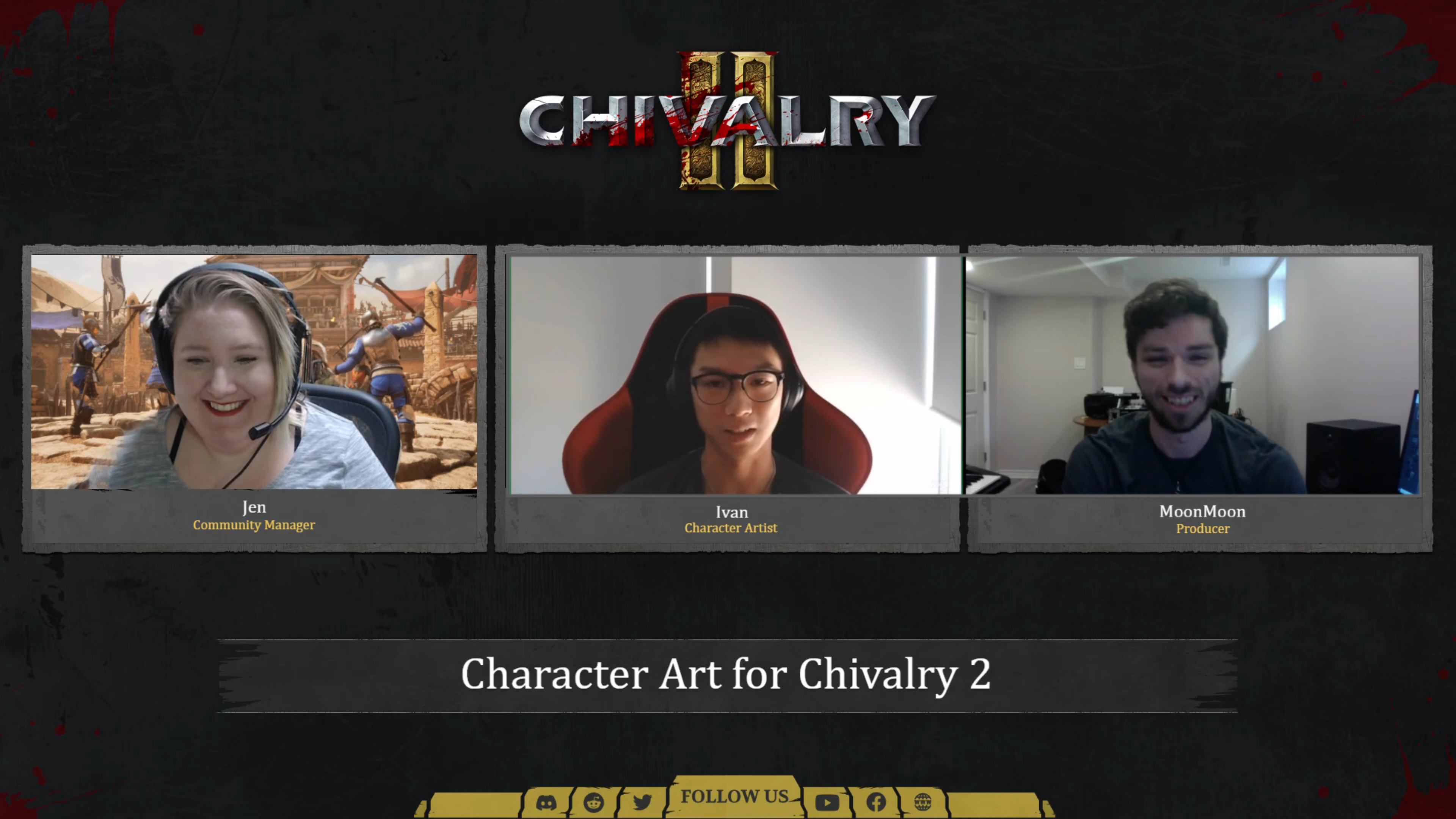 In our latest stream we hosted one of our Character Artists, Ivan Chan. If you missed the stream you can watch the VOD here.

Ivan started out in the industry as an Environment Artist (someone responsible for doing the art design on video game maps) but he transitioned naturally into Character Art during his time at Torn Banner. At Torn Banner we have four character artists on staff.

When it comes to choosing and designing cosmetics for Chivalry 2 we have a few guiding principles that we stick to. These design languages are things we have stuck with since Chivalry: Medieval Warfare. We use a lot of real world references for inspiration in order to keep things grounded and realistic while allowing for small bits of fantasy elements to sometimes be intertwined. In order to maintain the overall style of Chivalry 2 we also keep in mind that all cosmetics for a certain class should maintain the silhouette of that class. For example the Vanguard always having a long robe silhouette so that even at a distance you’re able to tell what class someone is playing despite what cosmetics they’re using.

As part of the process, a character artist receives concept art from the concept artist (who has iterated on the design with producers and game designers). Once the concept art is received, the character artist is tasked with creating that artwork in a 3D model. Here at Torn Banner Studios we use Autodesk Maya for modelling, Substance Painter for texturing, and Zbrush for detailing in order to create cosmetics for the game. Below are a few examples of cosmetics that were introduced in our House Aberfell content update in their various stages of completion (concept, wireframe, colour block out, and final rendering).

When it comes to designing the different tiers, one of the rules we tend to follow is to add more gold and embellishments to the highest tier armour/weapon. Each tier has its own unique look and even though a higher tier can be considered an upgrade, we strive to make every tier desirable to use. 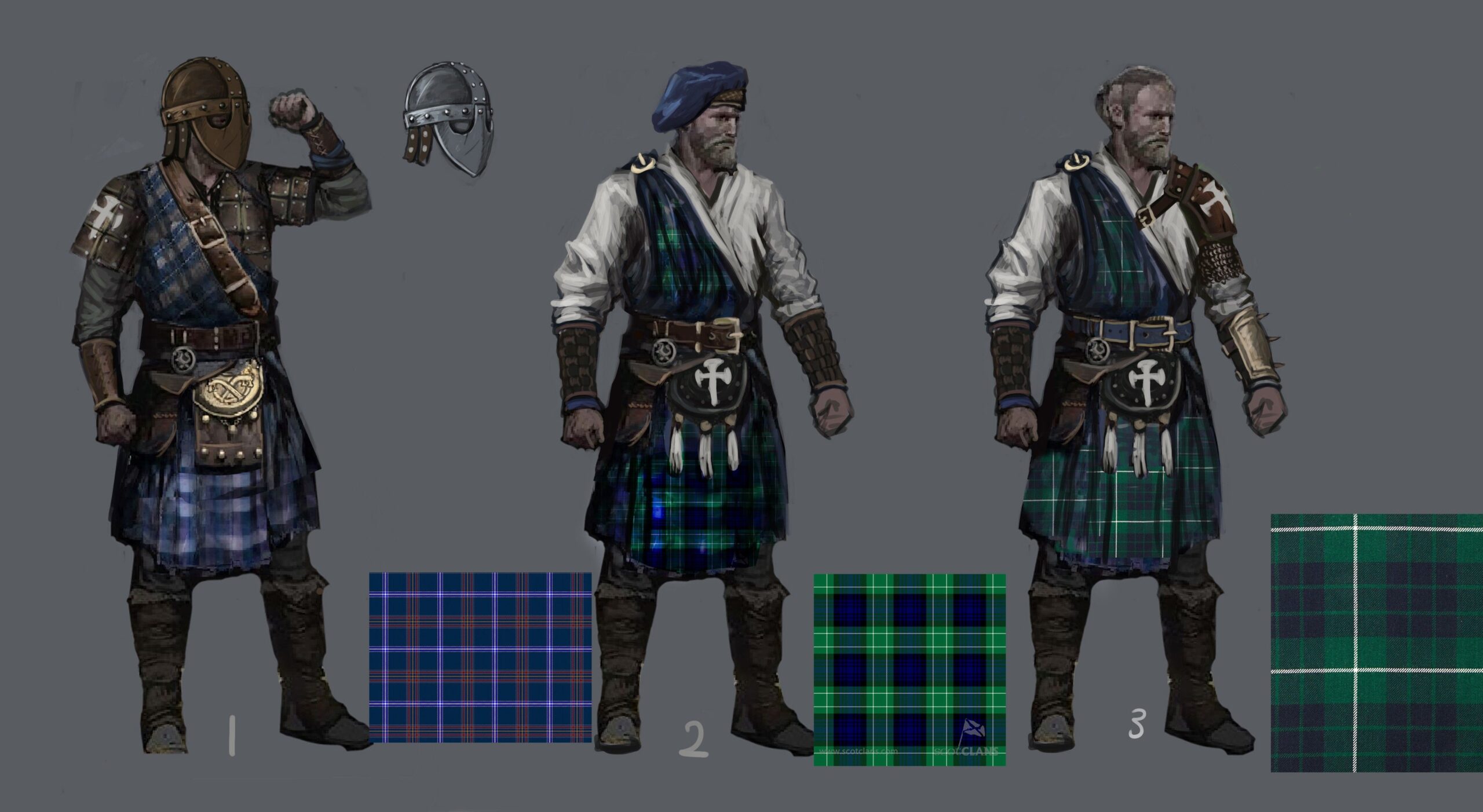 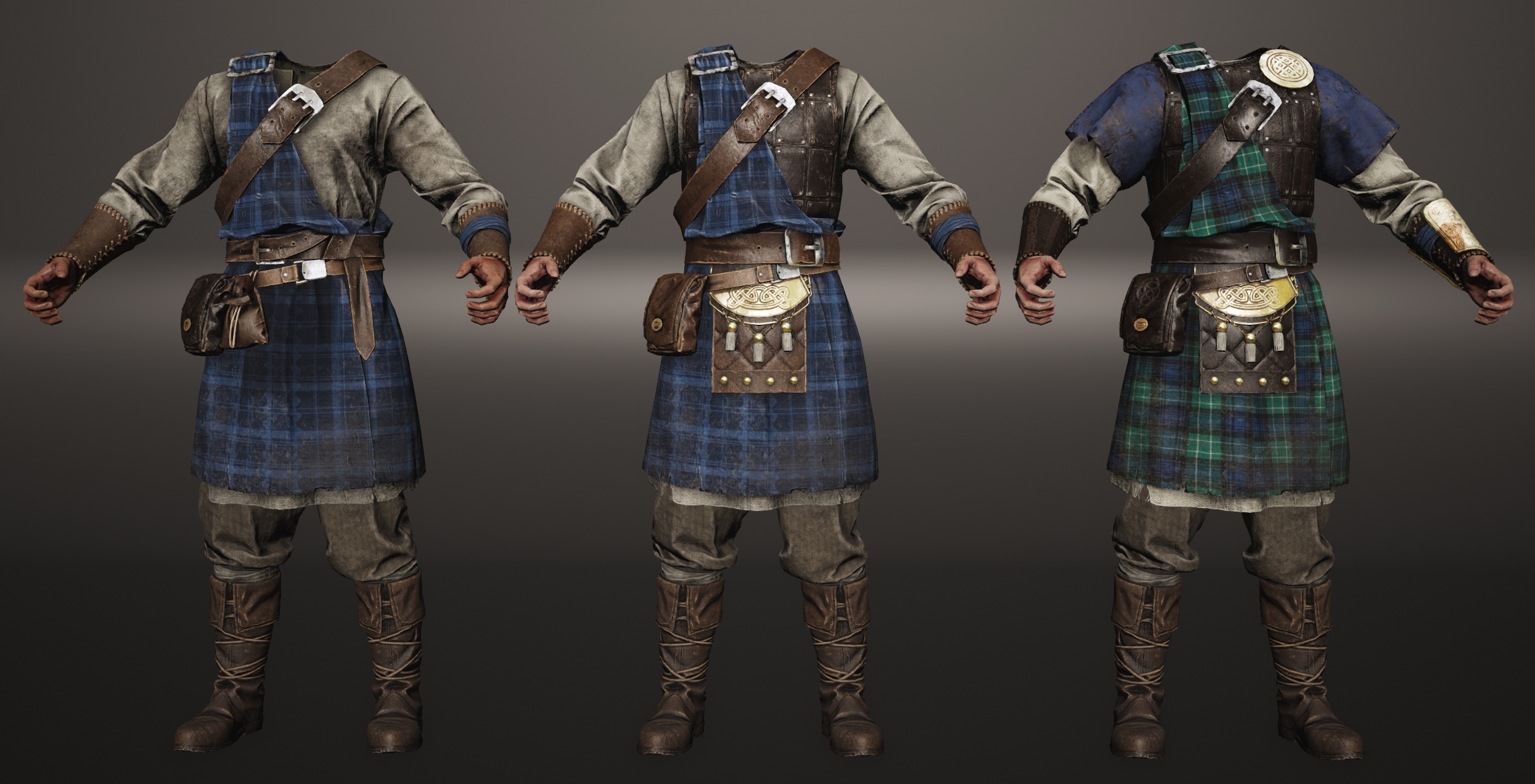 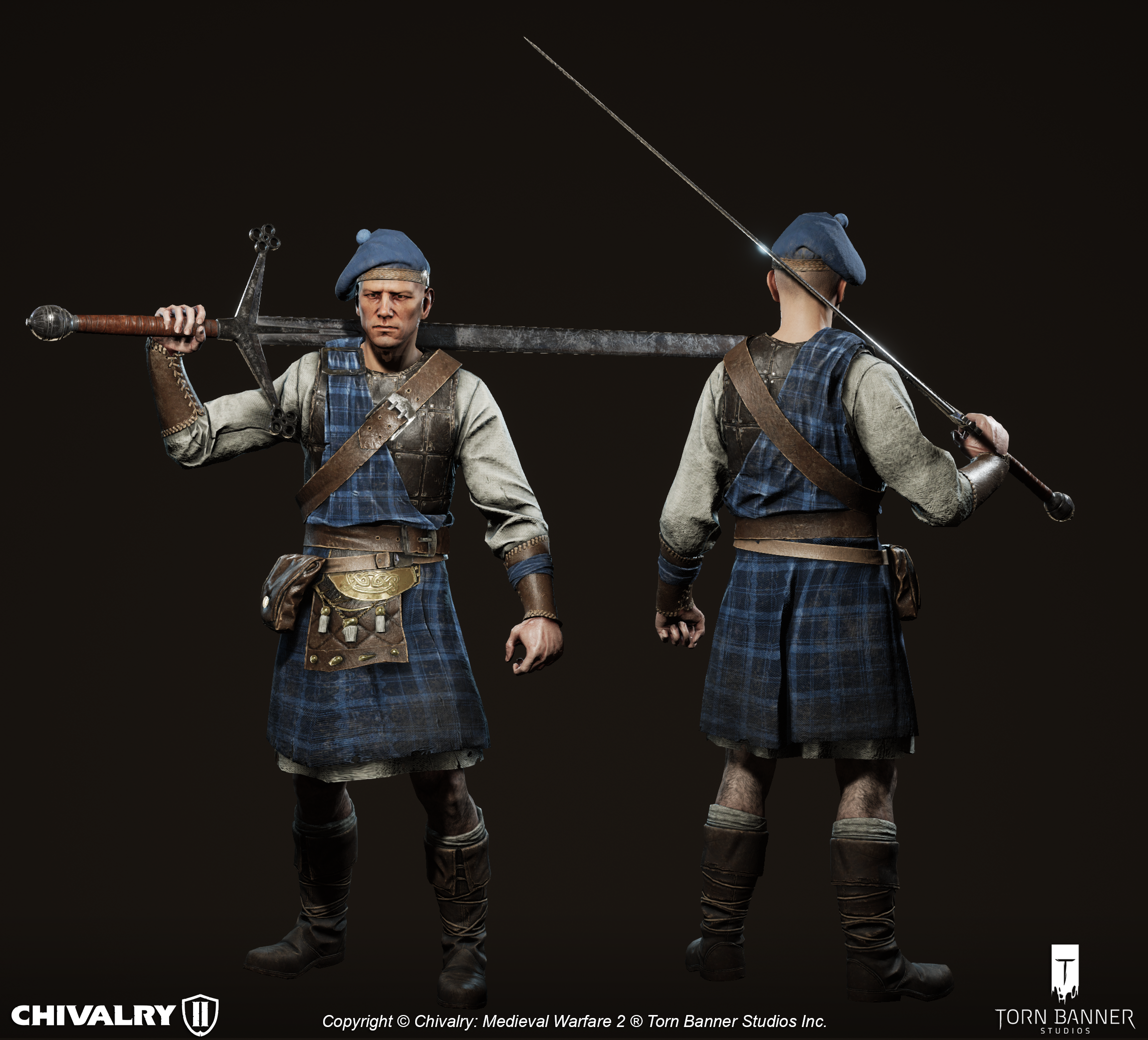 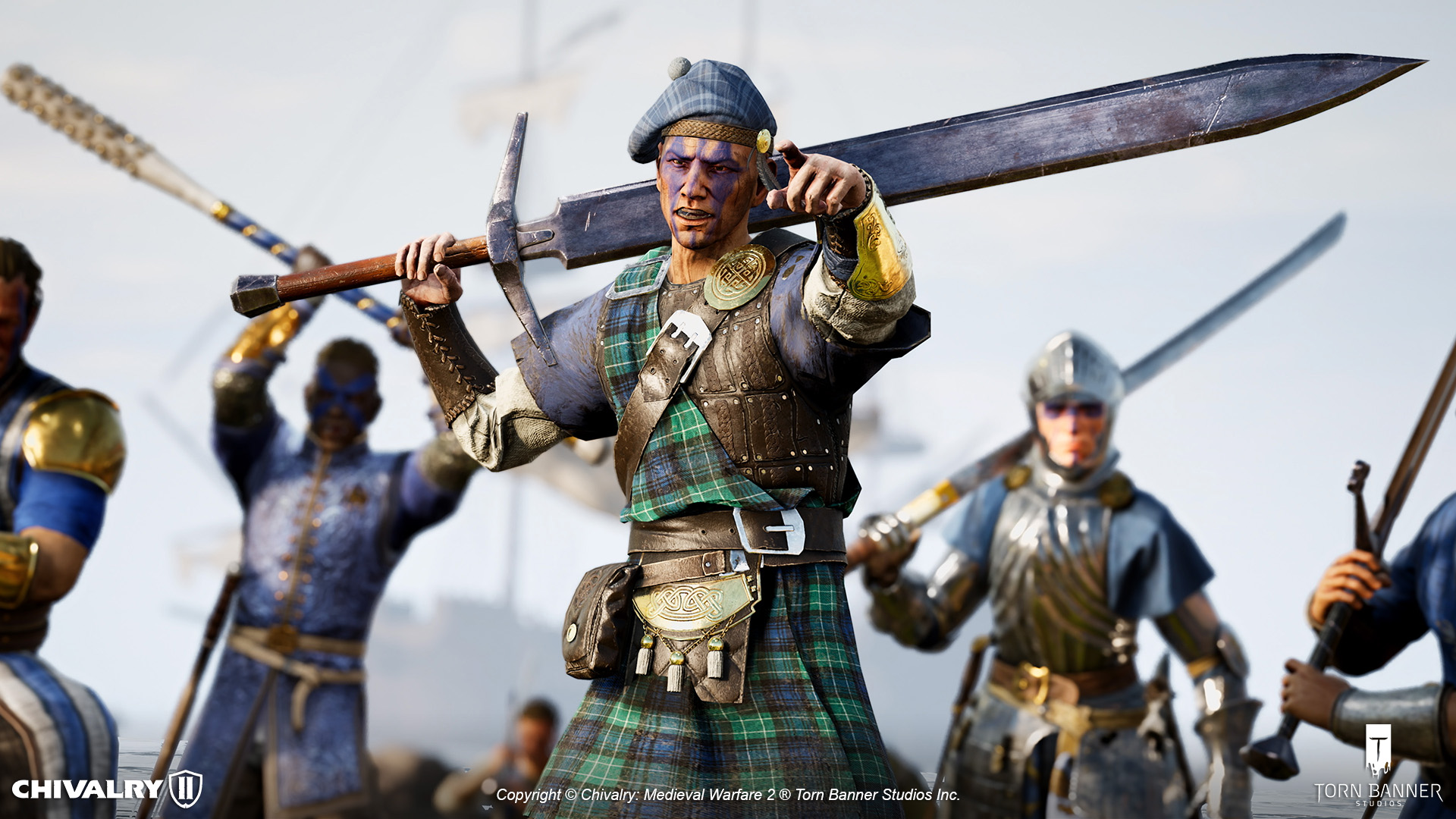 The druids presented a unique challenge for character artists. As they are a special playable character outside of our normal classes it allowed for more design freedom, and a unique chance to alter the shape and proportions of the character. This meant that the druid could be larger and taller and feature more fantasy elements than previously explored before. 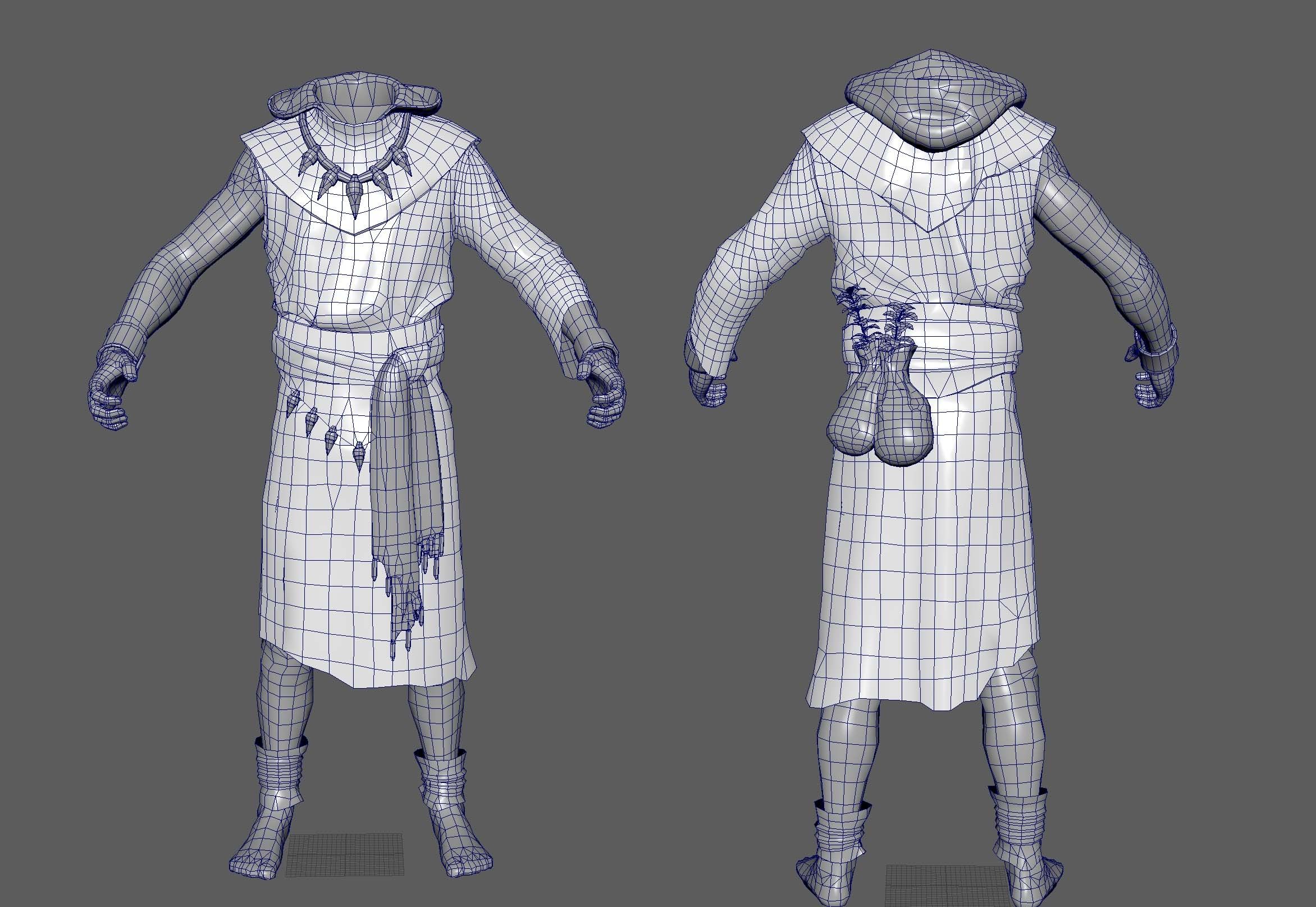 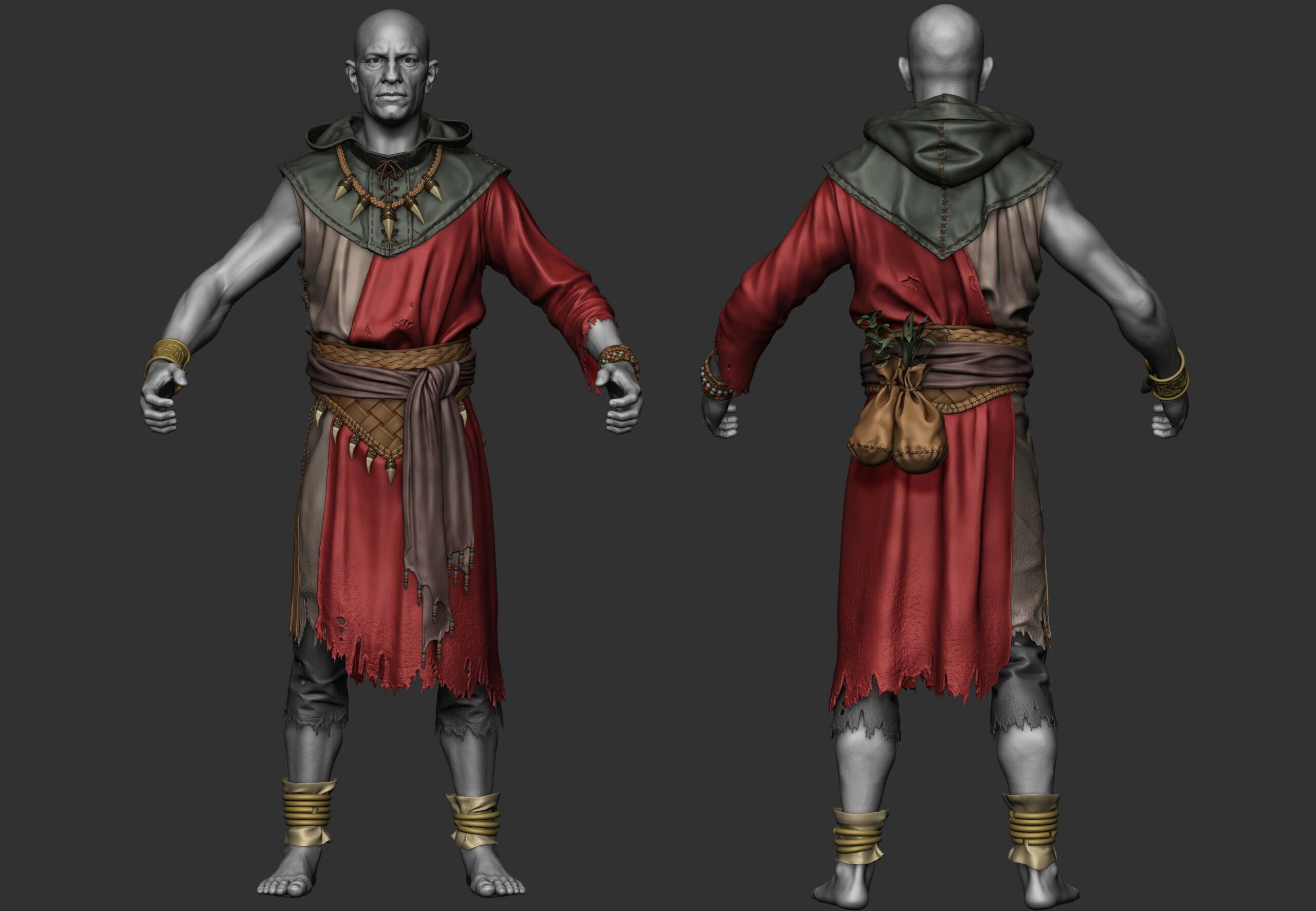 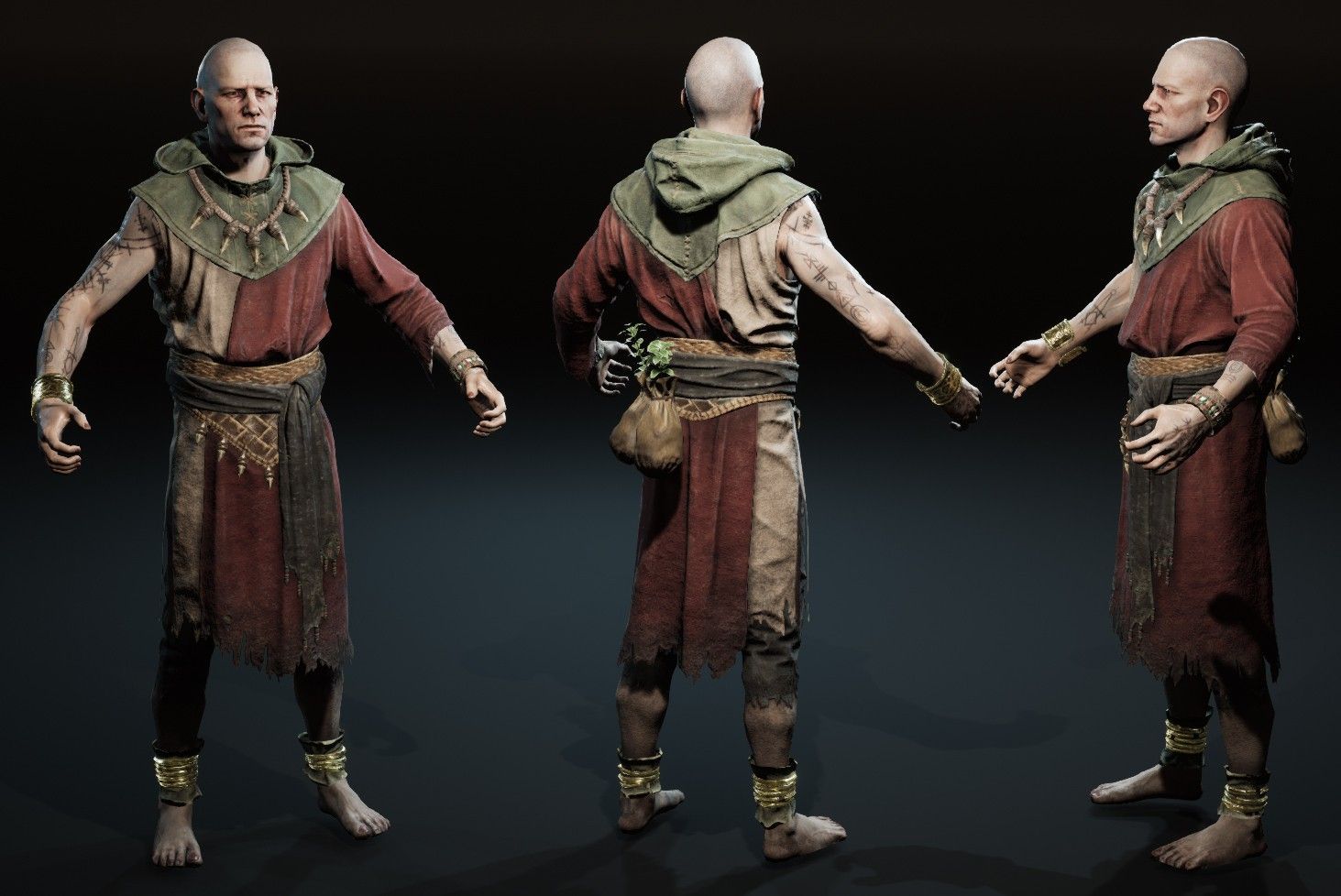 After the concept is received the character artist does a block out of the major shapes by sculpting or simulating cloth depending on the class being worked on. After that a more detailed pass is performed where details are added and more detailed cloth simulations are performed if needed to create a natural look to fabrics. When the model is finished the texturing begins. General colours are laid down on the sculpt in a colour block out. From there the texture of the materials is added. This includes scratches, wrinkles, patterns, and all fine detail that make the materials look how they would in a real environment. 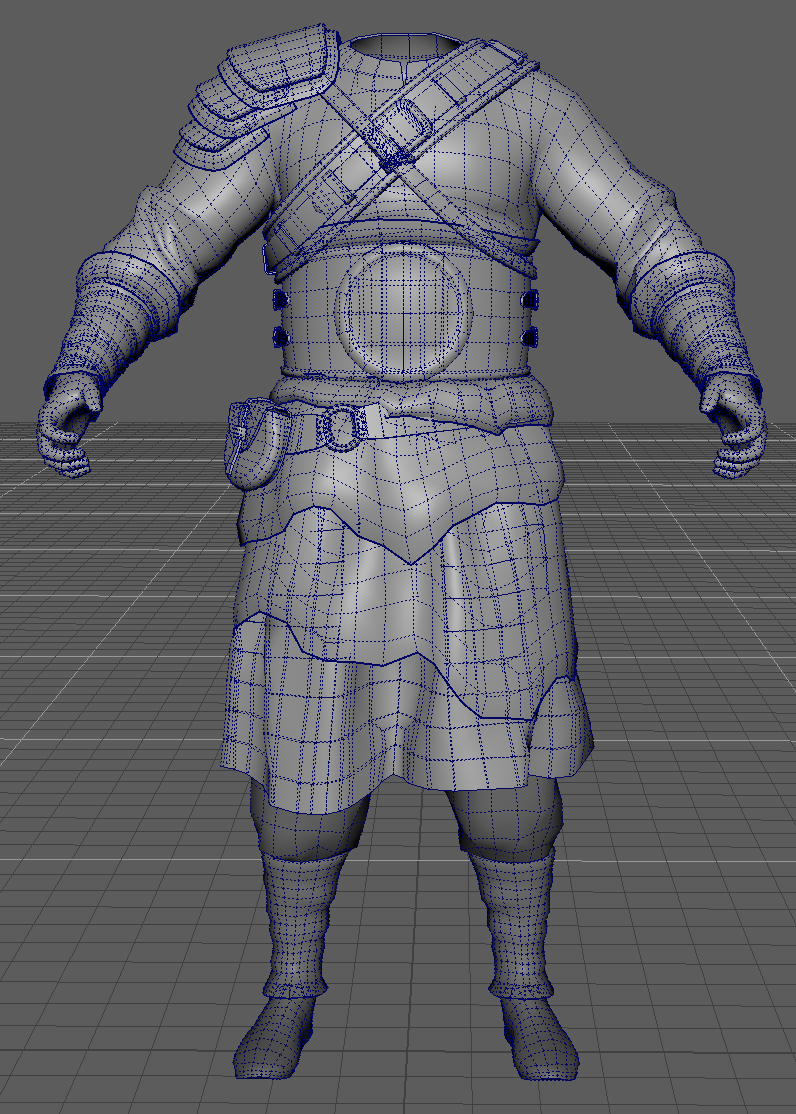 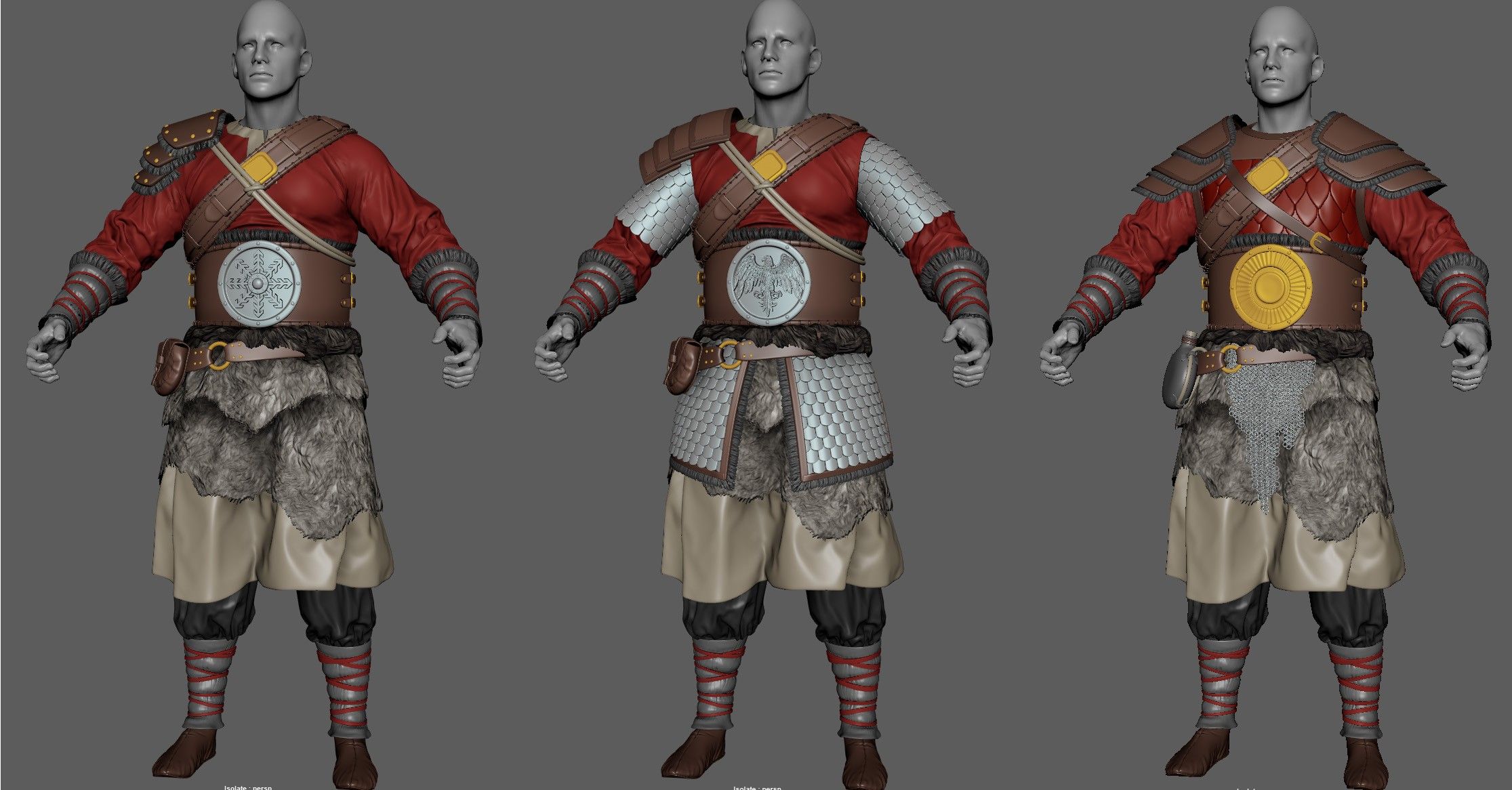 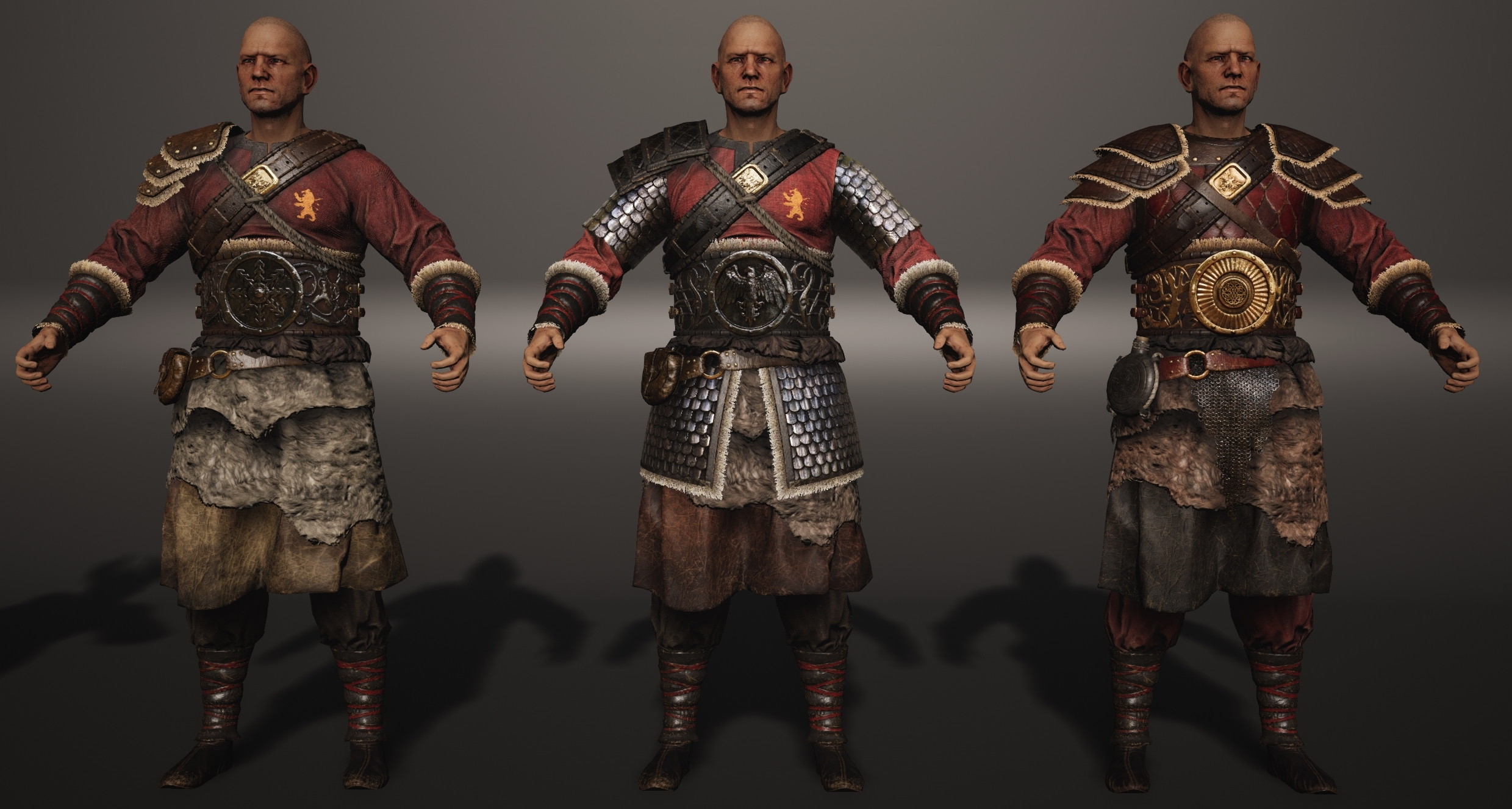 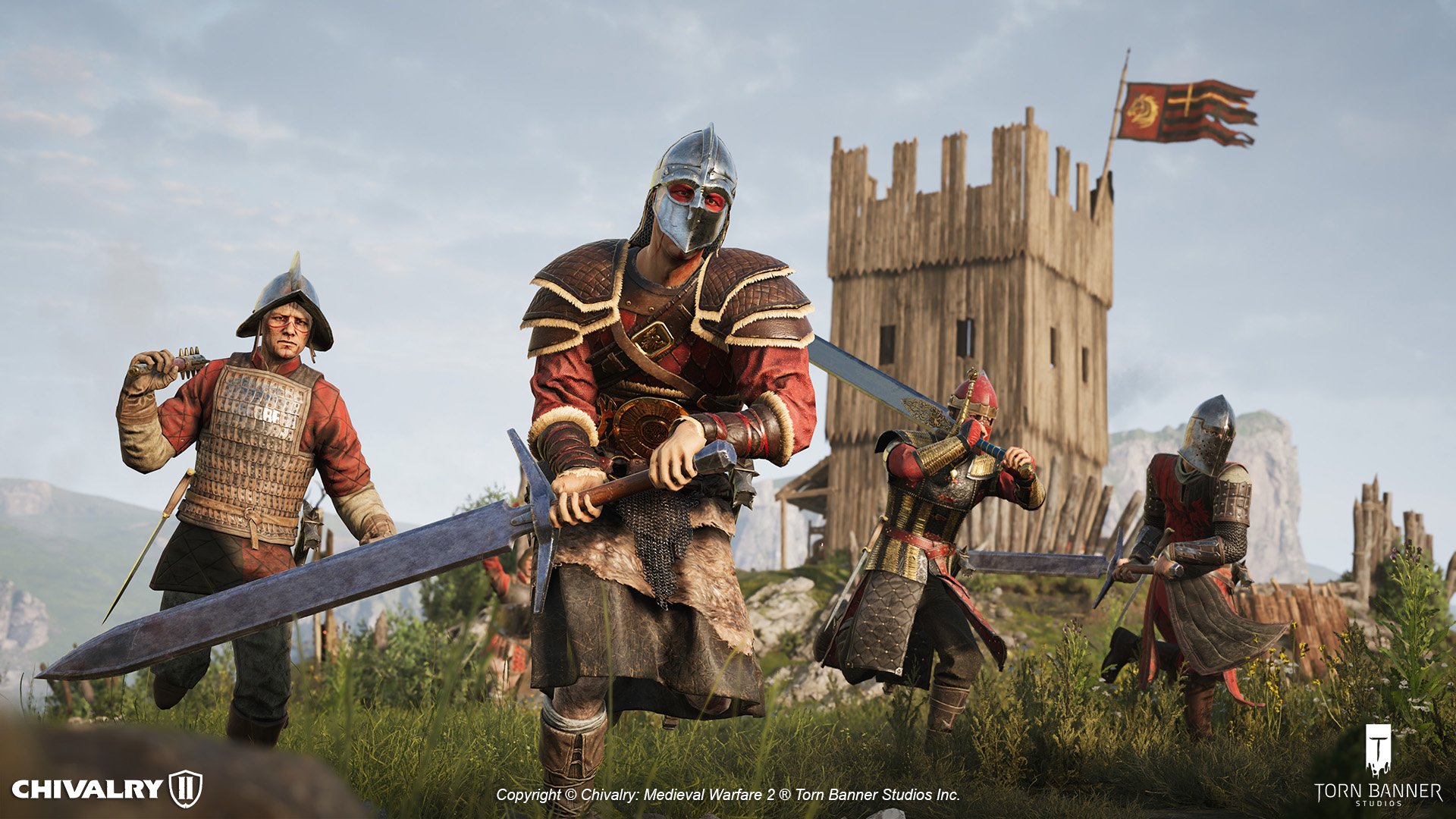 Once the cosmetic reaches the finished stage by the character artist, the character would then be rigged by another members of the development team. This takes the character from what we call a A-pose (standing straight and arms to the side) and puts the character onto a set of bones that allows the body to move and perform animations, and essentially makes it ready for use in-game.

There are many artistic avenues within the industry, including character art, concept art, environment art, and more. If you’re an artist who is interested in working in the games industry, Ivan recommends that you look at free tutorials that can be found across the internet, particularly on YouTube. There are also paid online classes that may be an option for those more serious in developing their skills, as well as academic level classes at a local college if that’s something you’d like to study. 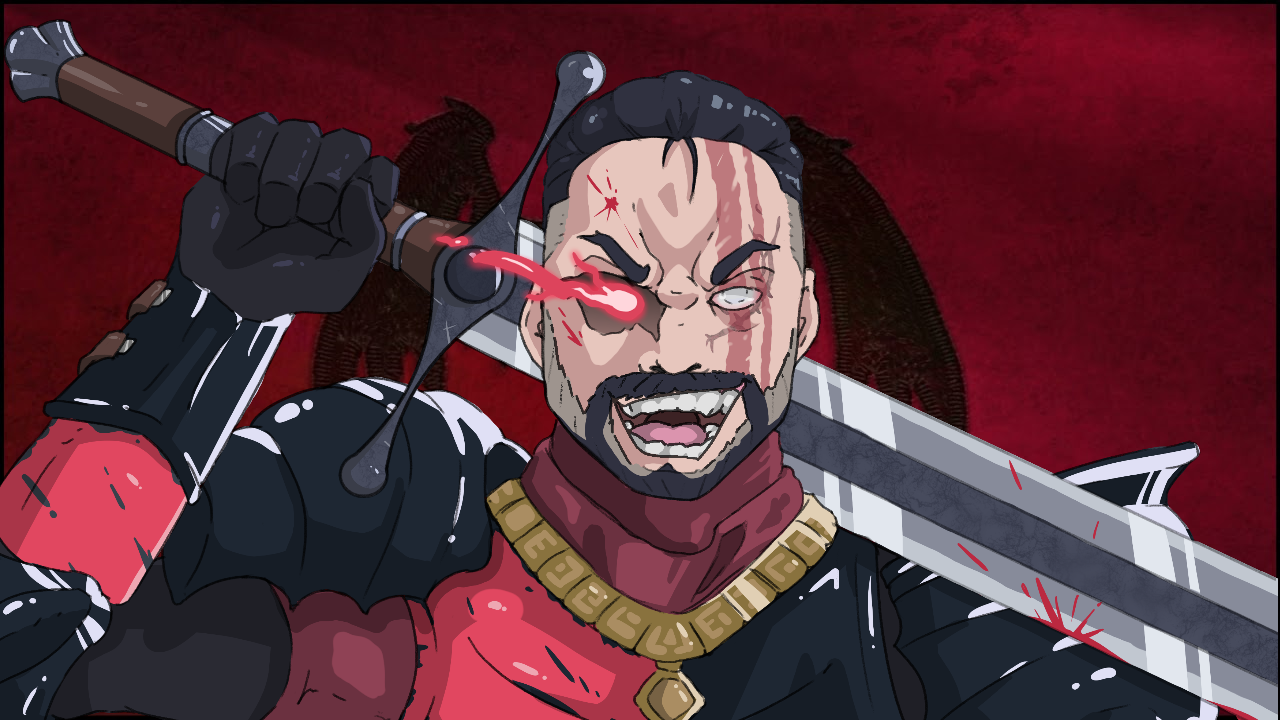 We aim to support the Chivalry 2 community in as many ways as possible, and one of those ways is to show some love to those who are making content for and streaming Chivalry 2 on the platform of their choosing. Chivalry 2 has a Partner Program which content creators can apply to on our Discord.

Our community guest this week, EpicTheJet, is a member of the Partner Program who streams Chivalry 2 on his Twitch channel. We are looking forward to hosting more guests from the Chivalry 2 community in the future as well so if you’re a creator who is not yet part of the program and you think it may be something you’re interested, head over to the Content Creators section in our official Discord for more information.

While on stream we showcased some high-level gameplay from Jet, and asked him about his time as a member of the Chivalry 2 community. In addition to his time in the Partner Program, Jet is also a Community Tester. The Community Testing program is a closed, invite-only program that offers a range of Chivalry 2 community members direct access to developers to report critical issues, give early feedback, and help test future content early during internal playtests before they hit the live game. We seek to involve the community in the development of Chivalry 2 as often as possible, and programs like these allow those with a vested interested in the game to receive additional support from the development team, and give additional assistance to the development team.

Be sure to join us for our next Twitch stream on Thursday, April 28th! You can follow the Torn Banner Studios Twitch channel for regular livestreams (once a more or more) as well.

Good morrow, knights. We’d like to bring you an update regarding some changes that were made in our previous patch. […]