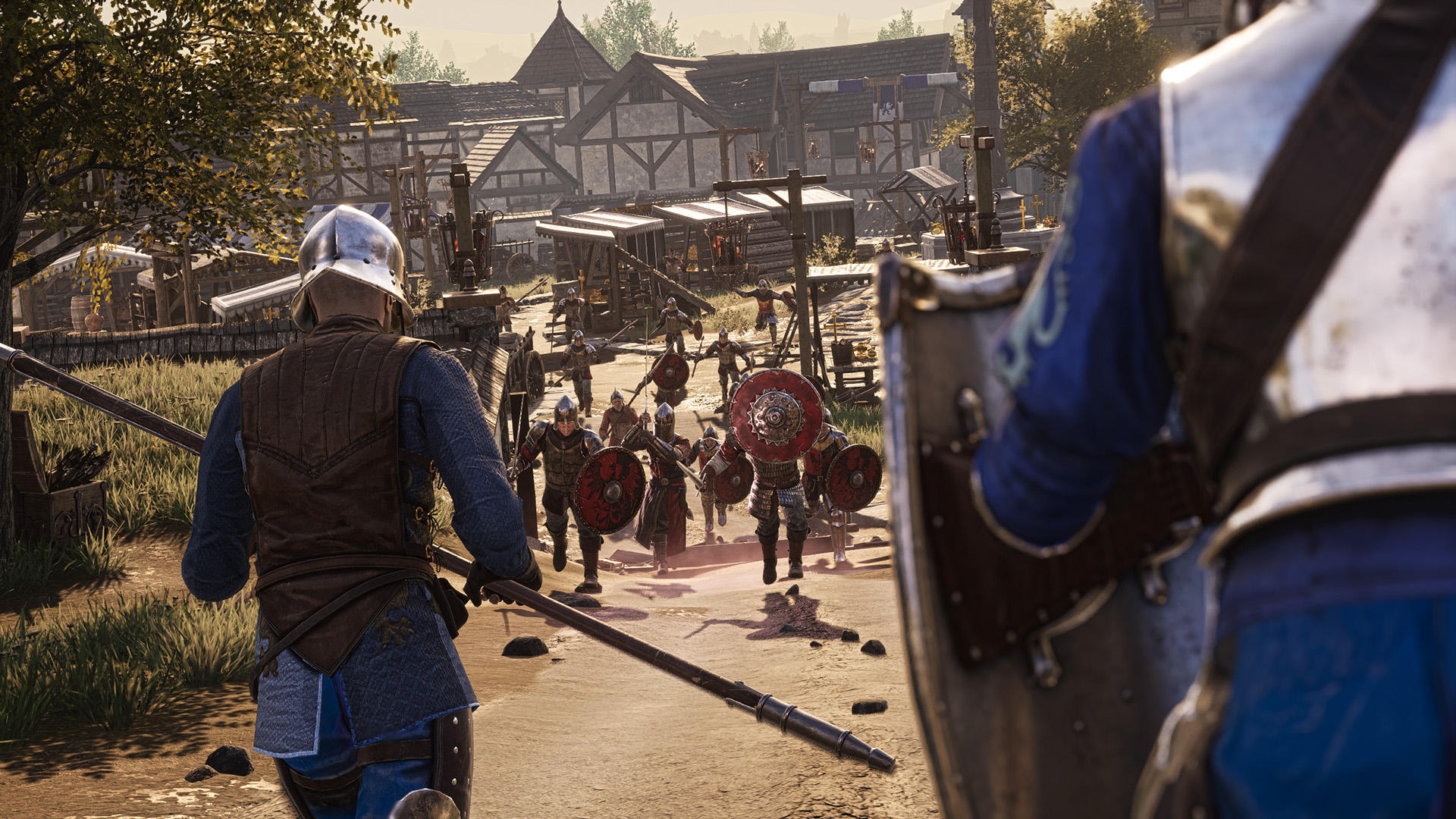 Good evening to all the warriors out there waiting patiently for the full release of Chivalry 2! We recently wrapped up Alpha Round 11 (Feb 23-28) and thought it would be a good time to address where we are in development and how the Alpha rounds have been going, both for the players and for our development team.

We recently announced that the Closed Beta will be moving from March 26-29 to April 23-26. We won’t be touching on Beta plans today but rather will focus on looking back at the Alpha so far as well as the current state of development.

Since the first Alpha began we’ve seen thousands of players, both new and old, charge onto the battlefield. Each Alpha has brought with it new features to explore as well as new problems for our team to solve. We have read pages upon pages of feedback, and made thousands of fixes as we progress closer and closer to our exciting June 8, 2021 release date!

Our first Alpha kicked off in March 2020. Since then we’ve held new Alpha rounds approximately every month. Experiencing the world of Chivalry 2 alongside the community was thrilling and nerve wracking for us. Each Alpha has been paramount in helping us define our design direction and narrow in on how we envision the end result.

Almost every Alpha has included new features and experiences for players. Including (but not limited to):
– Map testing
– Matchmaking
– Progression
– Parties
– Customization
– Localization
– Backend system tests
– New weapons and subclasses
– Much more!

One of the biggest challenges we’ve been tackling each Alpha round is optimization across every platform. From code, to environment art, to audio and beyond, almost every department here at Torn Banner Studios has been analyzing data coming in from Alphas and implementing optimizations to make sure the end experience is as smooth as possible for players on every platform. Every Alpha has seen a greater number of new optimizations than the previous Alpha. The goal of every optimization is to either reduce performance costs or memory costs. To determine what works best takes some experimentation over the course of development, and these decisions can cascade into some positive and/or negative secondary effects until they become refined. Optimizations can have some interesting symptoms, including but not limited to temporary issues such as:
– Increased crashes
– Worse performance
– Swing-through issues

As is sometimes the case, things may get a little worse before they get better. With that said we are very happy with how things are trending towards release.

At the end of the day, everything we’re doing is working towards better server performance, higher frames, smoother gameplay and a better overall experience for a variety of players on different systems and platforms.

When we first started working on Chivalry 2 we knew it was going to be an ambitious project. One of our major goals was to feature crossplay across PC, Xbox, and PlayStation, and we’re thrilled to say we’ve made this possible! The complexity of crossplay isn’t without its challenges however. These controlled Alpha sessions have helped us identify a number of problems that we’re able to address before release.

Alpha 10 (Dec 18 – Dec 21, 2020) was the first Alpha to include Xbox and provided a fairly clean first experience for Xbox players. Alpha 11 (Feb 23-28, 2021) brought to our attention a new unique login issue that only occurred on retail consoles. Our team was quick to diagnose this and put every effort into making sure that Xbox players could still be included in the Alpha despite the delay. At the same time that we uploaded the fix to Xbox Insiders, Xbox Live experienced an outage for approximately 6 hours. To thank our players for their patience, we extended the Alpha a few more days to make the most of the experience.

We were also able to collect data on some occasional crashes that users have been experiencing. Since reviewing the crash logs that have come in our team has diagnosed several common crashes internally and already put in potential fixes for them. This in turn should create a smoother experience for beta and beyond. We thank our Alpha testers for their immense help in this endeavor. Some common crashes from this past alpha:
– The movie player widget (seen in specific menu areas) was crashing while players tried to view certain pages
– Animation system was attempting to animate some invalid bones on characters

Other investigations are ongoing for different crashes people have been experiencing. To help in future tests, be sure to fill out any relevant information on any crashes you experience in the crash window if it appears. Every little bit helps!

To give you, the community, an idea of what we’ve been up to internally regarding feedback and bugs, let’s talk a little about where we are in development.

For a large part of the development process, our team has been focusing on the implementation of core features: both what you experience as a player and in the back-end to make things “work”. What that looks like to us is an emphasis on the creation, completion, and regression (verifying that they work in general) of tasks, which are game features. QA verifies these tasks and writes associated bugs for our database. The other type of issue that we deal with is a bug which we’re all familiar with.

While there has always been a focus on both tasks and bugs from the development team, until fairly recently tasks have been the priority in order to get everything into place. Don’t let this fool you though! QA has been taking bugs from internal playtests, Alphas, and their own testing and have written thousands of reports, many of which have been fixed in combination with task completion over the course of our Alpha period. Now we are ramping up to focus on the bugs side of things as we get closer to launch. 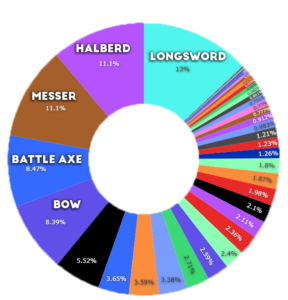 Your feedback is extremely important to us and we wouldn’t be where we are today without our community expressing what they’ve loved and disliked about their experience so far.

We gather feedback from multiple places, including; our forums, discord, reddit, internally, through surveys, and more.

After every Alpha we’ve sent out a survey to gather our player’s thoughts. Through surveys we are able to collect longer responses on specific elements of the game and statistical evidence as well. We are then able to compare and contrast how feedback has changed over time and between each Alpha round. 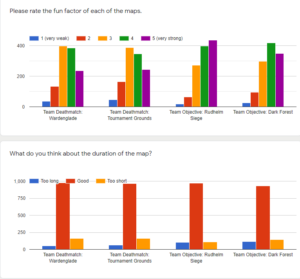 Feedback that comes in from each channel is vetted and brought to the appropriate department. From there we make decisions based on this feedback and statistical evidence on where we may be able to improve the experience and how it can fit into our development plan. If the feedback goes through, a task is created and slotted into our development timeline. This timeline ranges from before the first Alpha, to release, and even beyond. This means that even though it may look like feedback is not being addressed from an earlier Alpha, it may be making an appearance further down the line.

Combat balance is a big part of Alpha testing and is something we’re committed to. We’ve been gathering feedback for a while on where people think the experience can be improved and we have reviewed how our community’s feedback fits in with our combat goals. These past few alphas have been especially important in gathering your thoughts on the current state of balance. We won’t be talking in detail about the specifics of upcoming balancing at this time but there are more adjustments to come for launch.

We hope you enjoyed this update and peek behind the development curtain. We have an exciting few months ahead of us leading up to release so stick around as we ramp things up. Players can expect additional alpha testing before the Closed Beta begins April 23.

Next we are preparing servers for larger scale testing in Beta, which will feature multiple regions across all available platforms.

We’ll see you on the battlefield again soon enough!

Join the Chivalry 2 Alpha Round 11 on Xbox One and Xbox Series X|S!

Feb 26 update: The technical issues with Xbox users being unable to login to the Chivalry 2 Alpha has been […]

Read more about Join the Chivalry 2 Alpha Round 11 on Xbox One and Xbox Series X|S!